The role of institution(s) of art as a certain social glue and partition at once has belonged to central assumptions since the modernization process, especially in a national as well as a globalized framework. Despite differences in ideologies and aesthetics, curatorial practices in as divergent as possible art institutions like national museums, historical avant-gardes movements, contemporary biennials or local cultural centres have been grounded on, they have shared a premise on the social role of art: providing curated time-space for social encounter but also exclusion. Especially within the emancipatory movements like socialist, feminist, queer, black and migrant movements questions on the exclusionary homogenization aspects of art institutions (including curatorial practices) have been stubbornly raised.

In her talk Katja Kobolt, curator, art educator and researcher, will, in front of her individual and collective practice, address and discuss feminist and anti-racist curatorial methods in relation to canon politics and their implied (anti)social dimensions like democratization and appropriation, internationality and diversity, mainstreaming and marginalisation, inclusion and exclusion. The focus hereby will lie on existing, possible as well as imaginary relations in production and forms of interaction and re-presentation (of art). 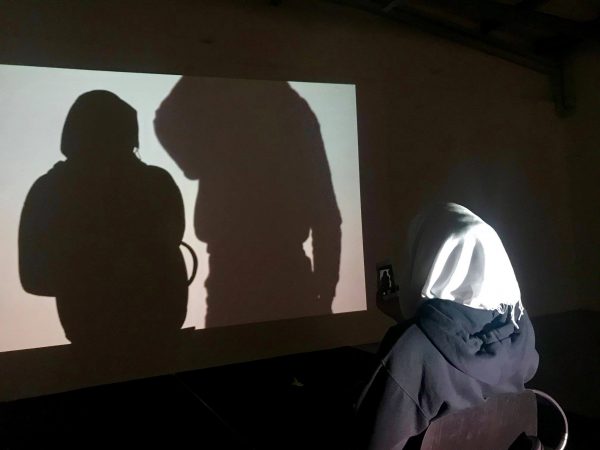 Installation view. Anike Joyce Sadiq, You Never Look At Me From The Place From Which I See You 2015 @ no stop non stop, Lothringer13 Halle, curated by Katja Kobolt. Photo by Suli Kurban

Katja Kobolt is a co-founder of the post-Yugoslav curatorial collective Red Mined (2011-) and their Living Archive editions including 54. October Salon Belgrade and On (Non) Motherhood symposium.

Between 2016 and 2019 Katja Kobolt co-designed the program of the Munich city art space Lothringer13 Florida and initiated and curated the exhibition and forum no stop non stop, on post-socialist images of migration at Lothringer13 Halle, and was engaged as an art educator in the projects Der Fahrende Raum and Friendly Confrontations, Münchner Kammerspiele.