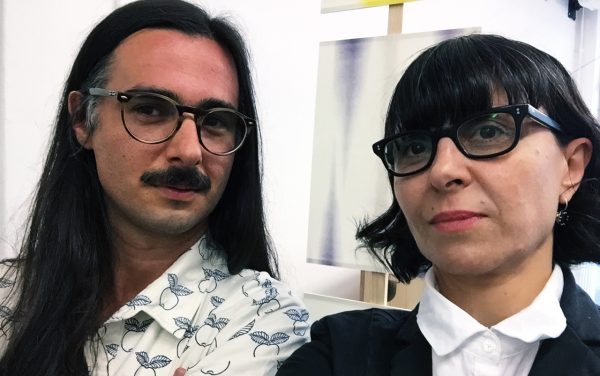 (Selfie with Brazilian artist Cristiano Lenhardt, with whom I have been in a collaboration recently.)

My curatorial practices are research-oriented and involve trans-disciplinary references and interventions across contexts, spaces and media, giving priority to collective exhibition making. Curating supposes a relation between at least two perspectives, which is already quite a crowd, the multiplicity of an affirmative practice that brings sociality in the field of art. It requires ecologies of co-existence, an immediate engagement with care politics that calls forth a dynamic of I-Other. Curating is a social and aesthetic process of becoming-together in which humans and non-humans act collectively. I am interested in all minor aesthetic forms with heterogeneous elements and phenomena of positive estrangement that evoke a direct relation and inevitably demand participation even in its most passive forms of contemplative spectatorship and unfolds the potentiality of bringing politics there.

I currently run the art project space Corner College (http://www.corner-college.com/) in a collective. The space is located in District 4 in Zurich, at the periphery of downtown, a neighborhood under urban development attracting investors’ interests. The milieu is heterogeneous, encompassing working class, immigrants of old from Southern Europe as well as migrants arrived more recently from elsewhere, but also a great number of artists, designers and musicians. A location that requires its own commitment. Corner College performs a discursive platform with a quasi-academic program of knowledge production, and a space for display that gives immediacy to current practices. I very much appreciate my collaboration with Alan Roth, with whom I also founded the critical collective for media art practice and reflection code flow (http://www.code-flow.net).

Running a space adds precious dimensions to curatorial practice that do not arise in the context of big institutions or of making freelance projects from time to time. Although in a very precarious situation, a project space can give another consistency and embodied materiality to curatorial practice and a lot of freedom to invent, to experiment, to intervene with micro-practice. At the same time, it means a variety of responsibilities that tend to traverse the borderline of the self-organized and turn into self-exploitation in an effort to secure extra-economic means and continuity.

For me, curatorial practice resembles the bricoleur who is a kind of a jack of all trades, and yet not subordinate to any of them, as the bricoleur adapts a finite stock of materials and tools, or works with secondary quality, that is, in-between the limited positions, always at the limit, taking into account the precarious character of both the art landscape and the practical plane of the curatorial. The bricoleur builds up durational constructions by fitting together events, or by means of events. The bricoleur collects not only objects, but these vivid moments of appointed time, by chance and by encounter, a practice that somehow has the destiny to dissolve itself into a complex system of relations and to become an impersonal refrain. By bricoleur, I do not mean just a collagist of do-it-yourself, or a selector and collector, but think rather of the roots of the word, the old French verb bricoler that refers to extraneous movements like the balls in a billiard game, or the shuffling of cards, movements irrelevant or unrelated to the subject being dealt with. With this, I am trying to say that the curatorial has to be distinguished from the position of the curator and her practices, to think the technology of exhibition making as a process of producing an apparatus or assemblage of individuation and displaced techniques.

During my studies in the Postgraduate Programme in Curating, I researched the practices of détournement from the Situationist movement to current contemporary art practices, as a critique of material and immaterial traits of the spectacle in late capitalism, and investigated how technological dispositives relate to the politics and aesthetics of difference. In my Master project, I was interested in the relation between representational and non-representational aesthetic forms, and practices that operate as a re-singularization, which can evolve into a method to display quasi-objects and quasi-subjects – all that is in-between language, image and movements, i.e., forms of hybridizations and their temporal contact zones of shared situated histories and geographies.

In the programme, I found a platform that both envelops critical reflections on curatorial practices and stresses very pragmatic sides of exhibition making. It expanded my visions of how to think the exhibition architecture and the politics of display, not as supportive and secondary elements to the existing architecture, or how to place existing art work, but to think about them as a concrete polyphonic construction and collaborative process between different practices and agents making an exhibition a new form of experience and expression, not only aesthetic but social, too.

I found it very important how the programme emphasized the historical context of institutional critique, which continues to provide a historiographic map of methodological questions that interrogate all positions (who, what, for whom, where, how?), the possible trajectories of perspectives, the diagram of power and forces involved in the process of making art visible. With the rise of this self-reflection the curatorial discourse has become a discipline of its own, which can be followed in the generosity of new institutionalism and has to be thought always in plural and transdisciplinary terms. Last but not least, a series of outstanding invited speakers, artists and curators, with some of which we had the occasion to work closely together, provided insights into their curatorial practices and the system of art: Paul O’Neill, Maria Lind, San Keller, Anton Vidokle, Stella Rollig, René Block, etc.