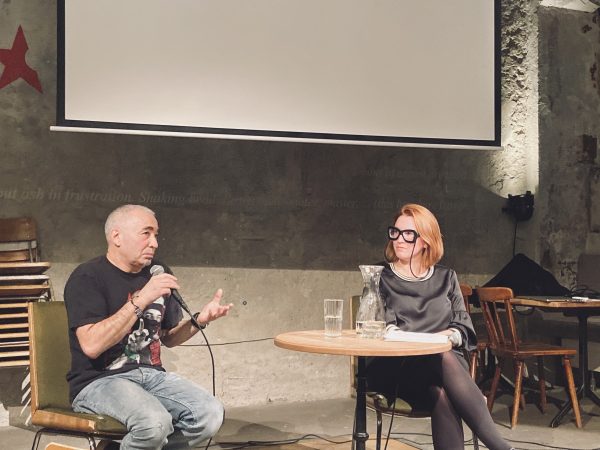 In my research I focus on the subversive potential of art practices, especially political, feminist and female art practices in post-Soviet Russia. In this research I also include queer and digital narratives as a catalyser for possible societal changes in Russia, and the possible effects these practices or contextualising theses practices can have in the ‘former’ West could have on societies abroad. I see the recontextualising, reenacting and relearning through these artistic practices as a chance to integrate them in the larger contemporary art discourse. I am being conscious about the traps and dangers of historicising, self- colonisation (stressing the ‘otherness’) and heroisation when curating theses practices and I ask myself the question whether it is possible to work with or curate them outside of their socio-polit-historical contexts?

This project builds on my former research on Pussy Riots Punk Prayer and my collaboration with the St. Petersburg art collective Chto Delat and the Russian political artist Petr Pavlensky. My preliminary research opened up a panorama of possibilities to trace and map the interconnections between currents, chains of events, artists and their practices, without resigning to a linear narrative. Important notions and historical considerations discussed include Russian futurism, Russias restorative turn to Orthodoxy and Homophobia, the patriarchal structures of Stalinism and Putinism, the artificialness of the Perestroika and privatisations. Being a daughter to a family of Soviet emigrants with Russian, Tatar and Polish roots and having been brought up in Europe, I see myself as a joint between the Western and the Eastern context. I see myself as an Allie to the artists and I conduct my research through dialogues and interviews. Furthermore, I recognised a lack of a comprehensive overview and a comparative analysis of post-Soviet Russian art practices with the Western contemporary art context, not only in an art historical, but also curatorial position. I want to explore the possibilities of an alliance between the artists, curators and public, many artists being curators in Soviet and contemporary Russia: Artists as Curators as Artists as Public as Artists.

Due to the peculiar ‘post’ status of the culture of the ‘former’ East, it is important to trace back the roots of and locate the ghosts in these practices. Decontextualised during the times of Perestroika, for the past 30 years Russian culture has gone through a time of tumult, hope, loss, trying to set its mark on the global art map, losing again, returning to left, turning to right, to God and Yeltsin to arrive to a time where this peripheral continent seems immobilised in time. Russia seems to have been defined by the end of something, the end of the Soviet Union and the end of communism. I would like to understand how this peculiar postcontext created the ground for radical and subliminal, direct, dissident, subversive art until the present day. Could we think of this period of post as something that precedes? As something that is a pre, meta or something in between? However, with Putin having paved his way to continue reigning, it is difficult to imagine different times as Russia seems frozen. It is important to think about how to work with this post, or society stuck between times, how to locate and map, and lead a dialogue with these artistic practices in Putin’s cultural system and abroad. Which new ways can be found to trace, work with, theoritize, write about or rather with, and ultimately curate these practices especially in the ‘former’ West?

With Putin making clear that he is there to stay, backing the change of an amendment in the constitution and thus being able to stay in power ‘theoretically’ until 2036, Russia has embarked into a new era. This era of stagnation and political immobility seems to have started to forget the demonstrations, LGBTQIA protests and riots in the first years of the 2010’s after Putin’s second election. What stays relevant however, are the artistic practices of those times Voina’s, Pussy Riot’s and Pavlensky’s actions that are representative of non-conformist and non-state subsidised art in Russia. Nevertheless, the new era requires a new (re-)writing, new mapping, new working with and through the stories and outcries told and shouted out by these practices. One can no longer talk about and merely present a ‘post-post-post’ documentation or a historicising of the ‘former’ East as a blind spot in global cultural studies and the field of art, one has to learn with and through the Russian art of the last decades, learn how to write with the narratives of the artists, and how to generate a discourse about and with these practices, in the realm of the Western dominated art (-theoretical and -historical) context.

It is important to understand that Russia does not equal the ‘former East’. Moscow, now the center of Russia, was once the center of the Soviet Union and had an influence way beyond its territories, including the territories of the Warsaw pact. Culturally, military and economically Russia was the colonial power during the Soviet Union and thus one cannot analyse Russia in the same way as the territories that were colonised by it, countries that have (along with many insecurities) gained their freedom and identity with the downfall of the Soviet project. Many of these countries turned towards Europe, and oriented their cultural and artistic realm towards the ‘Western’ model. How can we speak about the post-colonial Russia? How is the Russian identity crisis tight to the loss of territories and power? In reality one can argue, (as also in the Western context in regard to the African continent for instance) the cultural and financial colonialism continues: many Eurasian countries have very strong ties with the Kremlin, financially and military, and when it comes to pop culture, Russian television, magazines and music are still dominating. In 2014, with the annexation of Crimea, Putin decided to even go a step further in (re-)calming physical territories.

Furthermore, when analysing the Russian context through the lens of postmarxism, it is crucial to understand that the perspective of the West, where the socialist revolution didn’t happen, on left ideas is very different from the Russian perspective, where the revolution happened, the proletariat dictated and the socialist project failed. It goes without saying that when applying theory or analysing contemporary developments, this should be taken into account. These points of discussion should not be left out, when trying to analyse, write about or curate Russian (political) art.

With my research and practice based project, I wish to trace a broad and comparative map of the political artistic practices in post-Soviet Russia and weigh them against their past (the Soviet context), their allies (other related practices in Eastern Europe) and Western political art practices (f.ex. Jonas Staal). It is important to me, to create a hierarchically rather flat panorama (theory, practice, art-analysis and literature; practices inseparable for the study of the ‘Russian’ avant-garde) including theory (partially based on theories suggested by the artists), and artistic practices as study cases in which I to a large extend wish to speak with the artists and not about them, and also incorporating the lens of literature. I wish to challenge the chronology of the dissertation format by building it up through preludes and time shifts.

In this multi-layered project, I see my role as an allie to the artists and a facilitator of intercultural curating and dialogue. As a book or a dissertation can clearly only be an incomplete recueil, I envision a practical part, conducting a series of video interviews with the artists, and in case of Edward Limonov, people who have met him or who he has influenced, compiling most of the interviews into a growing online archive. My research should ideally enable me to create an authentic and considerate – in regard to the voice of the artist -, theoretically critical and linguistically powerful dissertation. Furthermore, the ambition of this project is to try to find and propose practical strategies to close the gap of under- or mal-representation of political or subversive Russian contemporary art in the Western context (e.g. overly historical, nonparticipatory, overly institutional representations etc.). Here again, my opinion is that a close collaboration and comradeship between the artist and the curator (and the audience / participators) is key. It is yet to be found out which formats, (next to the archive) will be valuable for determining these new representational strategies: (digital) conferences, letters, open source tactics, public commission, curator as artist as participant as curator / artist as curator as participant as artist, or not curatable at all. I am prepared to work with the ambivalence that such a research brings with itself, to look at practices though the lens of different times and temporalities, and to accept contradictions without having to find solutions. I am prepared to find out whether or not Russian subversive and political art can be curated and discussed in a mutually meaningful way in the Western context.

The topics that my research include, but are not limited to: the politics of the new left, postmarxism, post-modernism in Russia vs. postmodernism in the West, Putinism, dialectics and the contested mutual influence between political art in the (former) East and the (former) West, mutual influence of politics and art in Russia, territoriality and Russia as a peripheral center, history and temporality, feminism and being a female artist in Russia, Russia as a colonial power, the interconnectedness between the church and the state, juridical implications, subversion through artistic practices.

It is important to note that there are many ways of subjugation that a state power mechanism can deploy. Additionally, personal life choices of artists cannot be neglected. Not every initially dissident artist ends up in exile, and what was thought of initially as protest that will never enter the walls of a gallery, might end up in a major exhibition. One has to consider the ambiguity of showing political or especially protest art in gallery walls. Artists have to ask themselves what being dissident, what being an actionist, being an artist means in the situation of Russia today? Oleg Kulik is nowadays speaking in many TV shows, Osmolovsky has turned his back on political art, Peter Verzilov from Voina and Pussy Riot is an editor in a Russian online magazine, Pavlensky is a political refugee in France. 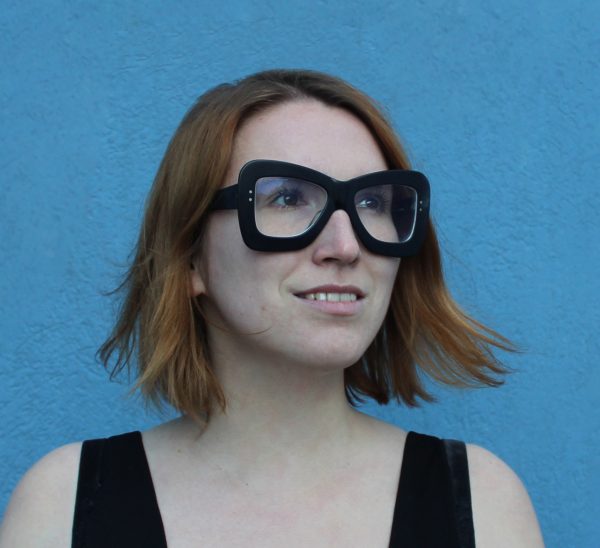 Anastasia Chaguidouline (1993) is a curator, art mediator and nomad. Currently based in France, she holds a BA in Fine Arts from the Royal Academy of Art, The Hague, an MA in Arts from Institut Kunst, Basel and an MAS in Curating from the ZHdK, Zurich. She currently works as a curatorial assistant in the Museum Tinguely, Basel and as an art mediator for Kunstmuseum Winterthur and the Vitra Design Museum. Having previously worked as a translator and copyeditor, she works at the intersection between artistic research, curatorial practices, language and mediation. Her main research focus lies on post-Soviet (political and feminist) artistic realm, as well as multilingual practices. Her contributions have been published in The Contemporary Condition series (Sternberg Press) and the OnCurating journal.