(Mess) Instead of Explaining 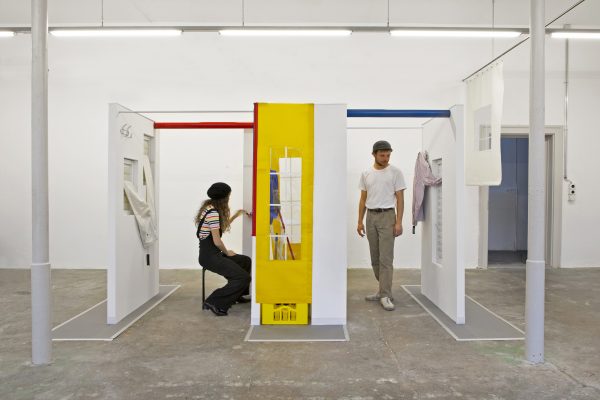 Curatorial Statement – Maya Bamberger
My curatorial practice is dialogical and rooted in the belief that artists are the first key to their art while simultaneously acknowledging that no one works alone. It has some still evolving foundations, and it is in the process of metamorphosing in response to their clashes into each other and to specific social contexts. It often grows out of constraints, self-reflexivity, and criticality in the search for uncovering hidden structures operating on us in disguise.

The first foundation is simply – and yet often taken for granted – art. It is the decision that the curatorial follows the art and not the other way around. The decision to be with art, look at art, and avoid imposing anything that is not inherently there. The second paradoxical foundation is the acknowledgment that art is rarely inherently anything. My practice is always part of the curatorial complex of the exhibition’s materiality and its political and social context, as suggested by Wiebke Gronemeyer.

The second paradox fueling my practice is assisting the public in making sense of art and helping the art affect the world while at the same time, not to surrender to the pretension of a coherent understanding of the works and being aware of my position as an agent in the current power relations in the field. I expose my ignorance and boundaries of knowledge which yields, on the one hand, modest situated language, and on the other hand, constant research to broaden my horizons.

The core question for this discussion is whether explaining art is the gateway to allowing everyone to enter the realms of contemporary art or alienate them with the lesson that they can only experience art through the mediation of the curator’s words? Otherwise, is not explaining the gateway for emancipation or a more sophisticated version of class distinction? Which cracks can be born in between?

The first chapter, titled ‘Why is Art Explained?’ outlines the origins and objectives of art explanations. I suggest that the tendency to explain art is rooted in the discourse of art as an institution constructed by taught rules based on Arthur Danto and George Dickie. With the help of John Searle’s definition of the institution, I start entangling the institution of art and the curator’s function within. I position explanations in their social context of class distinction, leaning on Pierre Bourdieu and acknowledging the mismatch of their political rationality. Moving from the immediate logic of explanations to their sociality, I set up the argument that the curator who seemingly educates the visitor to assist him or her is positioned as an agent in maintaining power balances in the accumulation of cultural life. This early social analysis composed the complexity of the inquiry and the question accompanying the research: Is there an alternative to explanations that do not follow the same social determinism? I propose two diversions, not without their inherent challenges.

After stressing the paradox of art explanations between its role in mediating the institutional aspects of art and its part in class distinction, the second chapter focuses on the writing of Jacques Rancière –The Ignorant Schoolmaster: Five Lessons in Intellectual Emancipation – as one solution to the paradox, coming from philosophy of education. It is examined through the case study of The Complete Jessy Cohen Museum in the ‘Israeli Center for Digital Art’ in Holon, Israel, with the help of Janna Graham’s critique on radical pedagogies in art galleries. The analysis of the case study of The Complete Jessy Cohen Museum begins with identifying its emancipatory potential and the specific conditions of its participants within this seeming prospect, only to fail again with an explanatory text written by the curator.

The third chapter introduces Wiebke Gronemeyer’s The Curatorial Complex: Social Dimensions of Knowledge Production with the positioning of an exhibition – across its objects, text, space, the knowledge it produces, and the relationships among the people involved – in relation to what outside the exhibition space. The chapter explores disruptive interventions in the communicative space of the exhibition with the application of Lütticken’s Symptomatology.

These subversive practices that corrupt communication instead of explaining are demonstrated and scrutinized in the discussion of Mess, which compiles all the theories presented. Mess explored the metaphor of the accident as embodied in art. Its curatorial text with its performative appropriation of the art’s quality is suggested as a non-explicatory strategy refusing the institutional axiom of “X is Y”. With its emancipatory motivation grounded in the assumption of equality, this approach is examined through its reception. The vexed voices of helplessness coming from people who felt excluded from this evolving paradigm reinforced the difficulty to relieve the paradox of art explanations. Ultimately, curator Matatyahus’s endeavor is investigated through the framework of poetic symptomatological interventions in the communicative space of the exhibition with the possibility of redemption out of disruption.

In this text, I inevitably constantly challenge the feasibility of the desired alternatives in our social and political conditions in which art is produced. Although not without hesitation, I find in Matatyahu’s approach the beginnings of a resolution to the paradox portrayed. If I must choose whether I follow Bourdieu and see everything as a mechanism for class distinction or believe in the exhibition as a performative possibilism of equality between people, I will choose the latter. Sometimes out of pure faith, and sometimes as a practical decision to assume equality to practice it. The assumption of equality is the foundation for a socially engaged practice responsible for the democratization of art instead of its alienation. I hope to continue searching for counter-hegemonic strategies in academic research, practice, and reflexivity and try not to give up when the reproduction of current structures seems unavoidable. Rancière writes that “the artist needs equality as the explicator needs inequality.”[1] I declare: the curator, this curator, needs equality.

Maya Bamberger (born 1991, Jerusalem) lives and works in Tel Aviv. Bamberger is the curator of RawArt Gallery in Tel Aviv since August 2019, a gallery dedicated to the representation of emerging artists. As part of her work at RawArt, she has curated numerous solo exhibitions, including for artists Hadas Satt, Esther Schneider, Iva Kafri, Sagie Azoulay, Ruven Kuperman, and Sharon Glazberg, as well as group exhibitions. One of her primary initiatives in the gallery is the shuttle project to promote artists at the dawn of their careers, including “youaresafe.net”, Maya Perry’s digital residency. Bamberger also instituted and produced, together with the gallery team, the 2020 Gallery weekend Tel Aviv events, marked the reopening of the Tel Avivian art field during the Covid-19 pandemic.

As an independent curator, she co-curated with Roni Koren, accompanied by Sergio Edelstein, an exhibition of artist Hilla Toony Navok at the On Curating Project Space in Zurich for the multi-format series Choreographing the Public. Bamberger holds a B.A. in art history and cognition from the Hebrew University of Jerusalem and a MAS in curatorial studies at Professor Dorothee Richter’s program at the Zurich University of the Arts. She regularly contributes to OnCurating magazine.